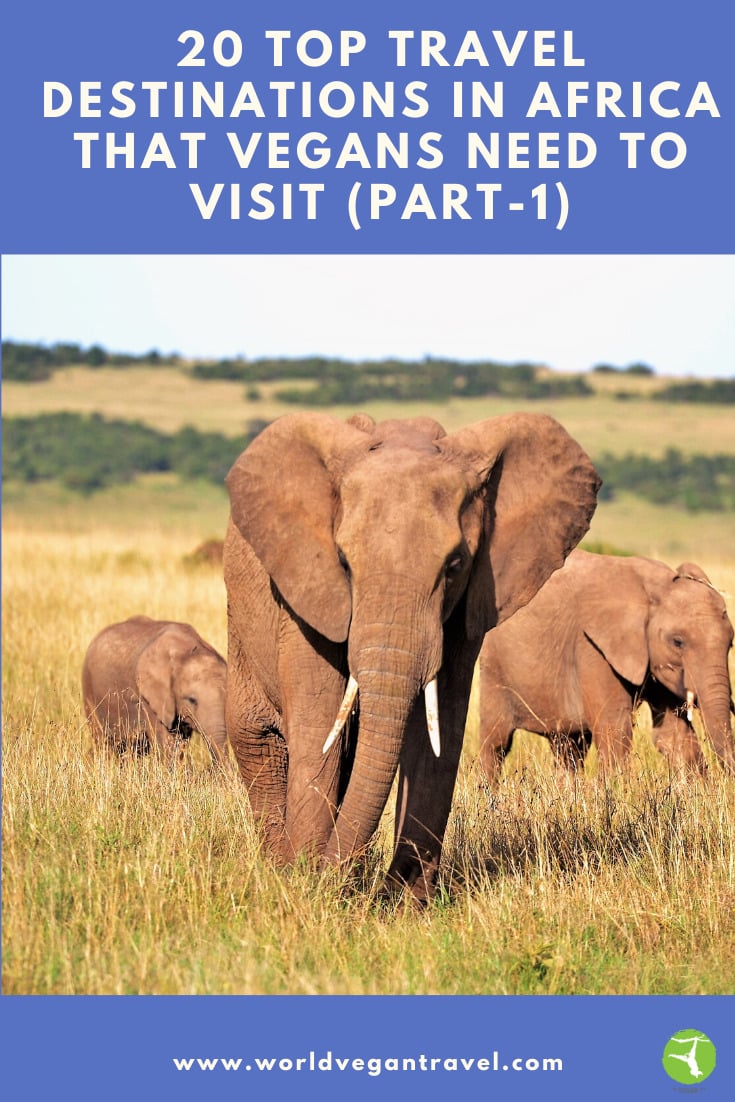 Africa is a huge diverse continent and you could spend a lifetime exploring just a small corner of the vast continent. These are destinations that the World Vegan Travel knows and loves and are places we are (or are thinking about coming) with travellers. In this first part, we have covered 10 top destinations starting from A to J.

Addo Elephant National Park is a diverse wildlife conservation park situated close to Port Elizabeth in South Africa and is one of the country’s 20 national parks. It currently ranks third in size after Kruger National Park and the Kgalagadi Transfrontier Park. This park offers some of the most spectacular elephant viewing in the world. Antelope species abundant in the main game area of the park include red hartebeest, eland, kudu and bushbuck whilst Gemsbok, black wildebeest, springbok, buffalo and black rhino are found in the arid nama-karoo area.

Place to stay  Addo Main Camp, The popular main rest camp of the park offers a wide variety of accommodation units to suit all tastes and plenty of activities to keep visitors busy. A unique feature is the waterhole lookout point, floodlit at night, within the camp as well as the underground hide, allowing close encounters with wildlife at the waterhole.

Best time to visit The climate is temperate to hot and temperatures in summer (November to February) may reach over 40 degrees Celsius. Winter days are mild but cold at night with frost occurring at times.The average annual rainfall is 450 millimetres and is spread throughout the year, although peaks do often occur in March/April and September/October.

A great place where you can get an up close and personal with the penguins. They seem quite accustomed to people, though don’t get too close when they have babies nearby. The wood platforms help you get close. There’s a ‘public’ beach area which is quite popular among the tourists. This is one of the top 5 Cape Town attractions. A very family friendly beach with calm sea water conducive to floating around in. The penguin sanctuary is a natural wonder, and the penguins are so sociable they will often swim with the people. A secluded, wonderfully maintained beach. Although observable all year, the best time to visit is during the breeding season between February-August.

If you would love to see elephants, then Chobe National Park in Botswana is a must-visit. Known as The Land of The Giants, Chobe National Park in the north of beautiful Botswana is home to Africa’s largest elephant population.
The park comprises more than 10,000 km2 of rich ecosystems, diverse landscapes and an abundance of wildlife and birdlife around the Chobe River. Chobe National Park is also a hotspot for birdwatchers, with over 450 recorded species – the highest density in Southern Africa. In addition there are a large herd of buffalo to be found, with great lion, leopard, hippos and crocodiles.

A trip to Chobe is not completed without a mokoro canoe excursions on the beautiful river itself. This allows you to see interesting wildlife and birdlife from a different perspective.

In addition, Chobe offer a wide selection of accommodation, from campsites to remote luxury lodges – most are found along the Chobe river banks. Whatever your accommodation preferences are, you are sure to be satisfied.

Place to stay Chobe Marine Lodge
Best time to visit For the biggest volumes of game July-October is a perfect time to visit. October is the driest month and sees large congregations of animals but it is also very hot. For experiencing birdlife, December to March is good time to visit. Chobe is quieter (people numbers) in December – March which would give you more private game viewing. Once it gets to the busier high season (July-October) then vehicle numbers increase. A lot of the newborns appear November/December time. Thee bush is a lot greener and the cloud formations with the rains (December-March) can make for some great photography.

Photo by @daisygilardini | Baby elephant are simply adorable. The mini version of the biggest animal on Earth evokes immediate feelings of tenderness in just about everyone. After a gestation period of 18 to 22 monthsâ almost two yearsâthe calf is born weighing around 250 pounds (115 kg) and stands about 3 feet (1 meter) tall. Baby elephants donât really know how to use their trunk for the first 6-8 months of their life. Before they learn how to use it properly for eating, drinking, and bathing, they swing it around in an extremely comical way. This young elephant fell down while playing with an older calf. Balancing with his trunk and legs, he could finally stand up and start chasing the other fellow again. I love to spend time observing themâit’s so much fun! Follow me, @daisygilardini, for more images and behind-the-scenes stories. #africa #elephant #botswana #chobenationalpark #wildlifephotography

The David Sheldrick Wildlife Trust (DSWT) Elephant Nursery in Nairobi National Park provides a safe haven to orphaned baby elephants rescued by the DSWT. The Nursery provides the first stage in the hand-rearing and development of milk dependent baby elephants. Once they graduate from the Nursery, aged 2-3 years, the elephants move to one of the DSWT’s Reintegration Centres in Tsavo East National Park, from where they will ultimately return to the wild.

Portuguese, French and Berber architecture frame the maze-like streets of Essaouira, a charming and vibrant port and resort town on the Atlantic Ocean. Nearby, couples and families stroll the beaches of Cape Sim and Sidi Kaouki, which also attract surfers of all types. Relaxation is easy to find here, as is a bus to Marrakech, for those looking for a daytrip.

The oldest university in the world is not Oxford or the Sorbonne, it is the University of Al-Karaouine, and you will find it in Fes el Bali. This walled city, a UNESCO World Heritage Site, will transport you back to medieval times. Visit the ancient maze-like quarters of the Medina to Fes el-Bali and the four imposing Gates of Fes, with their distinctive Moroccan tile work. You can walk, or, if you arere brave, take a taxi, the daredevil drivers will have you hanging on for dear life.

Greyton Farm Animal Sanctuary is situated just 7 kms outside the village of Greyton in the Western Cape on a 40 hectare private farm, owned by the founders of the sanctuary, Nicola Vernon and Rohan Millson.  It was established in 2014 and is a registered Non-Profit.  It is home to 91 pigs, 32 sheep, four goats,  two geese, two chickens and a duck as well as eleven dogs and seven cats.

Beautiful Hermanus is a South African seaside town that is a popular whale-watching site. An initial visit to the Old Harbour Museum will acquaint you with the rich fishing history and impress you with a massive exhibit of a whale skeleton. With dozens of area vineyards, Hermanus is a great base for a guided wine tasting tour.

Not to be too dramatic, but this might be the best day of my life. â¡ â¡ â¡ Whale watching Part 2… Up close and personal with more Southern Right Whales than I could count. Not to mention all the dolphins, penguins and seals. â¡â¡ #whaletail #bottlenosedolphin @src_whalewatching

The quaint village of Imlil is a lovely Atlas Mountains settlement that offers stunning views and the chance to scale Toubkal, the highest peak in Morocco. Guided treks and tours are among the most popular activities, as visitors clamber to ascend to the top. Certified guides lead excursions to suit most levels of experience and athletic ability, allowing you to take in the landscape, nature and traditional foods of the area at your chosen pace.

Jukani is part of the South African Animal Sanctuary Alliance (SAASA) which is the home of rescued predators and other wildlife where the focus is on conservation and education, specifically on the plight of predators both in captivity and in the wild all over the world. At Jukani you can see most of the larger cats such as lion, Bengal and Siberian tiger, jaguar, leopard, cheetah, puma, caracal and serval together with rarer species such as white lions and tigers and black leopard. The sanctuary is also home to other predators such as African wild dog, hyena, jackal, honey badger and gorilla together with other wildlife such as zebra, springbuck and raccoons. Our experienced and knowledgeable guides will take you on a tour of the sanctuary and introduce you to its inhabitants whilst offering a wealth of interesting and fascinating information regarding each of the species.A visit to Jukani is not just about viewing big cats, it is an informative experience at a sanctuary where the animal’s physical and emotional needs are placed first and foremost.

So which one you is your favorite among the list? Let us know in comment.
6 spots left! 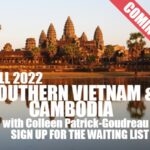 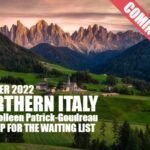